VELUX Group calls for healthier homes across UK and Europe

84 million Europeans live in homes that are too damp, causing respiratory illnesses such as asthma and COPD (chronic obstructive pulmonary disease), according to new research from the German institute Fraunhofer IBP.

European governments’ expenditures on asthma and COPD in terms of hospitalisation, loss of productivity and medical treatment amounts to 82 billion Euros each year, according to the research.

In light of the findings, the VELUX Group is calling for healthier homes to be a central consideration for the new European framework for national building legislations, which will affect UK house builders once implemented.

The research from Fraunhofer IBP, reveals the socio-economic costs of asthma and COPD, which are proven effects also of living in damp and unhealthy buildings. The costs are 82 billion Euros annually, covering European governments’ direct expenses on medical treatment and additional care for patients in- and outside of hospitals, as well as indirect costs due to loss of productivity.

The study also reveals that close to 84 million Europeans live in damp or mouldy dwellings, which increases their risk of having respiratory diseases and life-long allergies by 40%. This proves the number of people living in unhealthy buildings remains an issue, despite recent awareness of the correlation between indoor environment and human health. 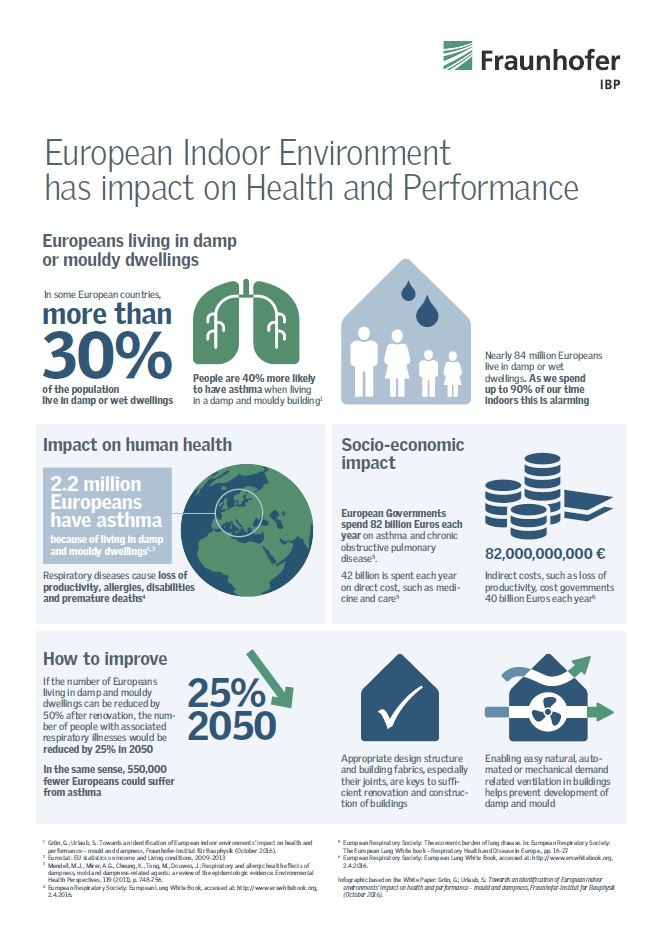 We are convinced that the development of respiratory illnesses as a result of damp buildings can be reduced, and it is now clearer than ever that the legal framework for buildings needs to support healthy indoor climates in new and existing buildings. This way, human lives could be improved, and it is also good for the economy too.

Sneddon points to the upcoming revision of Energy Performance of Buildings Directives, EPBD, under the Energy Union, where the framework for national building legislations will be set.

It is a big concern to see that very many people spend their everyday lives in damp and unhealthy homes. What is more, the new research reveals for the first time that 2.2 million citizens have asthma directly because they live in unhealthy buildings.

Fraunhofer’s research, based on a cross-sectional study, questionnaires and in-depth case studies across 32 European countries, estimates that the number of Europeans living in damp and unhealthy dwellings could be reduced by 50% by 2050, which could reduce the number of people with associated respiratory diseases by 25%. In the case of asthma, this could lead to a reduction of 550,000 people.

How to prevent dampness in homes

According to the Fraunhofer institute dampness is one of the main defects in buildings across Europe, primarily caused by inadequate building structures and home owners’ lack of attention to ventilate sufficiently. As a consequence, mould is likely to grow, however the risk of this can be reduced significantly by choosing the right building fabrics during renovations.

In April 2016 the VELUX Group completed the RenovActive project in Belgium, a home renovation based on Active House principles focusing on the building’s architectural quality, human health, comfort and well-being, energy efficiency, and environmental benefits.

A key element in the modernization is the prevention of indoor dampness and mould, which is ensured by a natural and continuous airflow in the house. Read more about RenovActive by clicking here.

The Fraunhofer IBP white paper, ‘Towards an identification of European indoor environments’ impact on health and performance,’ is now available on https://www.ibp.fraunhofer.de/content/dam/ibp/de/documents/Presseinformationen/Velux-Prestudy_WhitePaper_141205_amended.pd

About the VELUX Group

For more than 75 years, the VELUX Group has created better living environments for people around the world; making the most of daylight and fresh air through the roof. Our product programme includes roof windows and modular skylights, decorative blinds, sun screening products and roller shutters, as well as installation and smart home solutions. These products help to ensure a healthy and sustainable indoor climate, for work and learning, for play and pleasure. We work globally – with sales and manufacturing operations in more than 40 countries and around 9,500 employees worldwide. The VELUX Group is owned by VKR Holding A/S, a limited company wholly owned by non-profit, charitable foundations (THE VELUX FOUNDATIONS) and family. In 2016, VKR Holding had total revenue of EUR 2.4 billion, and THE VELUX FOUNDATIONS donated EUR 155 million in charitable grants. For more information, visit www.velux.com.

VELUX Group calls for healthier homes across UK and Europe